The Commission’s online survey also contains questions asked to both gamblers and non-gamblers about wider gambling issues and topics of interest to consumers, including: self-exclusion and gambling management tools, information to players, terms and conditions, complaints, social media & advertising and social gaming. These are asked on a quarterly basis, biannually or annually depending on the nature of the questions.

Some games that can be played online often look like gambling but do not meet the legal definition of gambling. These games may involve a game of chance for a prize and may use gambling-related imagery or mechanics such as cards or dice, but offer a prize which is not money or money’s worth. They are played over the internet, often via mobile phones, and are built on social networks. They are ‘social’ in the sense that interaction with other people is a key feature of the gaming or gambling. These are also referred to as social casino games.

The boundaries between social gaming and commercial gambling have become increasingly blurred as a result of:

As such, participation in social gaming has been tracked in the online survey since its launch in 2015. Questions are asked to all respondents on a bi-annual basis.

Of all respondents asked, 20% had participated in online gambling-style games. This figure increased to 29% among those who had gambled online in the past 12 months. Both of these figures have remained stable from 2018. 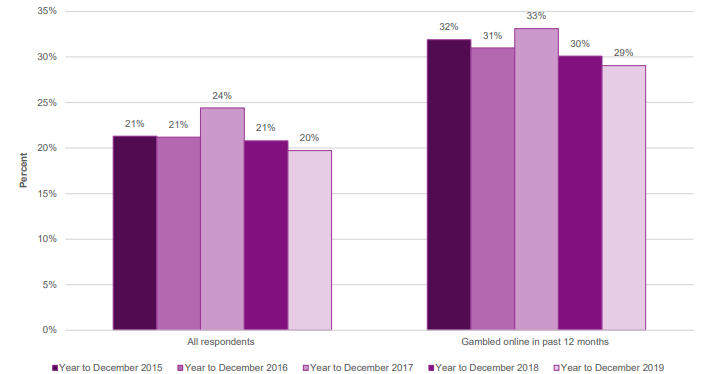 Participation in online gambling-style games among online gamblers was highest for those aged 25-34 (41% of all those who had gambled online in the last 12 months). However, since 2018, a significant decrease of 8 percentage points has been seen in this age group. Participation between 2018 and 2019 was stable across all other age and gender categories.

Amongst social gamers who had also gambled, 51% stated that the first activity that they undertook was gambling to win money. 44% reported playing online gambling games first. The remaining 5% could not remember which activity they had done first, all of which have remained stable from 2018. 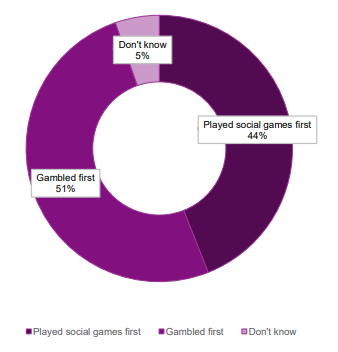