This section reports data on online gambling behaviour in the year to December 2019, using data collected via the Commission’s quarterly online survey conducted by Populus. Surveys are conducted with people in Great Britain aged 18+. The core questions in the survey ask online gamblers about how and where they gamble online.

Online gamblers are asked how many online accounts they have with gambling companies, covering all activities including betting, bingo and lotteries, and how many of those they spend money with regularly – either in the past 12 months or on a monthly basis.

In 2019, 44% of online gamblers were registered online with one gambling company, however, the average number of accounts held in 2019 was three, which has remained stable compared to 2018. 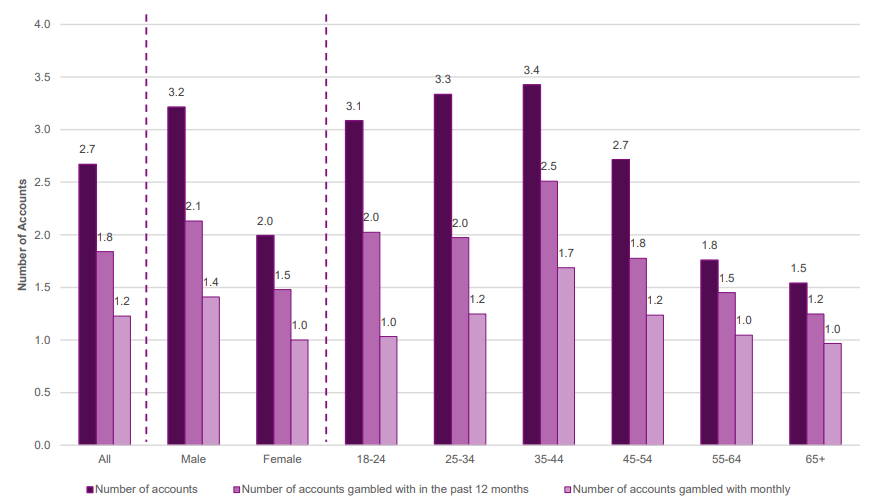 Overall, just under half (44%) of gamblers held just one online account; and this was increasingly common for those in the older age groups. 56% of gamblers held more than one online account. Younger gamblers were more likely to hold more than five accounts; 20% of those aged 18-24 held five or more accounts (a 5 percentage point increase from 2018), whereas this was the case for just 5% of those aged 65+.

It can also be observed that, among gender and age groups, there is more variation in the number of accounts held and less variation in terms of active accounts (accounts gambled with monthly).

21 Average number of accounts refers to accounts held by respondents, but not necessarily gambled with frequently