The purpose of this report is to look at all operator complaints and disputes received by the Gambling Commission and analyse key issues, themes and trends

The purpose of this report is to look at all operator complaints and disputes received by the Gambling Commission and analyse key issues, themes and trends from the Contact Centre, Alternative Dispute Resolution (ADR) providers, the resolution service Resolver and from Regulatory Returns. A description of each source can be found in Appendix 2. The report is designed to be a reference that combines multiple complaint/dispute datasets into a single coherent source.

The reporting periods for each dataset are October to September to align with ADR reporting and to ensure each dataset is being compared with the same time frame. Data described in this report relates to complaints closed within the above period.

There were a total of 151,956 complaints during October 2019 - September 2020 across regulatory returns, the Gambling Commission’s Contact Centre, ADRs and Resolver, with regulatory returns accounting for the majority of these. This is a decrease of 21,410 (12.3%), compared to the same period in 2018/19. Note that there will be duplication of complaint numbers across these data sets, for example a consumer could use Resolver for help in constructing their complaint, before complaining to the Contact Centre and then potentially escalating to an ADR. 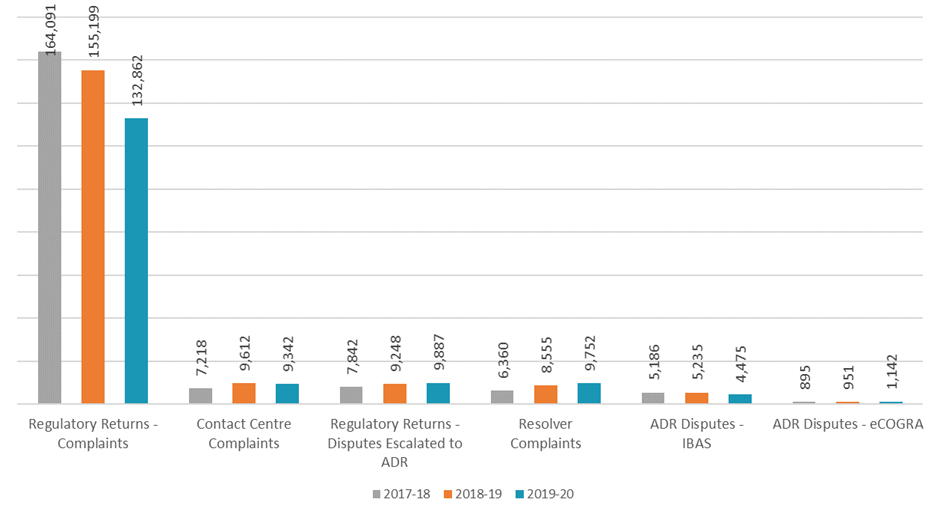 The way complaint types are structured is different for each data set, which can make direct comparisons between each difficult. Instead, key themes have been extracted from each data source. The main issues raised by consumers are regarding their accounts, which generally involves non-payment of winnings, account closures, and Social Responsibility, which includes consumers being allowed to gamble after self-excluding.

The main complaints raised by consumers across all organisations are regarding accessing their accounts and withdrawing/receiving the money they believe they are owed, with particular issues around non-payment of winnings and the social responsibility of operators.

Nearly 80% of all Consumer Complaints involve:

The most prevalent complaint type during 2019-20 is Accounts (42.2%), this includes consumers being unable to withdraw funds or having their accounts closed.

The most common dispute type received by IBAS was Disputed Settlement Criteria/Bet Instructions (23.4%).

The most common dispute type received by eCOGRA was Deposits and Withdrawals (32.6%).

The previous information gives an overview of the complaints landscape. Further detailed information regarding each data source can be found in Appendix 1.

The number of complaints received by operators (as reported to the Gambling Commission via Regulatory Returns) has decreased by 22,337 to 132,862 during October 2019 to September 2020 (14.4% decrease).

Regulatory Returns show there has been an increase in consumers escalating their dispute to an ADR, from 16.3% of reported disputes during 2018-19, up to 18.7% in 2019-20 (9,886 escalations in total). This includes all ADR referrals including those which are refused.

The two largest ADR providers, IBAS and eCOGRA, reported a total of 5,617 disputes escalated to them during 2019-20. Of these disputes, 3,118 resulted in a resolution, whereas 2,499 disputes were refused. Reasons for refusal include customer communication ceased, operator complaint process not exhausted (complaint reported to ADR before operator 8-week resolution period) and regulatory matters (e.g. self-exclusion).

IBAS, eCOGRA and Resolver have all shown a decrease in the average dispute resolution time, although there are varying time periods across the three, 45 days, 19 days, and 16 days respectively. This can potentially be explained by the complexity of the cases they receive.