Consultation response for online games design and reverse withdrawals and proposed changes to the design of online slots.

Summary of consumer research into auto-play

We inserted a number of questions on autoplay into December’s online tracker (a nationally representative online survey which typically gets 2,000 responses per quarter). Of these responses, 358 were online slots players and of those, 190 respondents indicated that they have used the auto-play feature.

The aim of this research was to test the views of consumers on auto-play, as well as their patterns of use and establish any self-reported correlation around areas of likely harm, dissociation and intensity of play.

This number of responses gives us a sizeable base of slots auto-play users on which to base our analysis and can assure us of a wider reach than the limited number of consultation responses from consumers. It should be stressed that we expect a large amount of read-across to highly engaged gamblers amongst the autoplay using cohort, which can be a driver for risks.

Claimed autoplay use is relatively frequent across a past 12 months timeline, with 41% of online slots players having claimed to have used the feature (an additional 10% claimed to use it >12 months ago).

Where used, it is often used frequently, as 34% of respondents who had used the feature in the last 12 months indicated they used auto-play on online slots more than half of the time.

An additional 33% indicate they use the feature less than half of the time and a similar percentage ‘rarely use’ auto-play.

Headline findings are shown in the following chart.

Sample size : 190 adults aged 18+ who have ever used auto-play on online slots

In addition, the following findings support our concerns about the potential intensity impact of auto-play, as we sought to understand the relationship between auto-play and the three main dimensions of intense play (time, spend and speed). 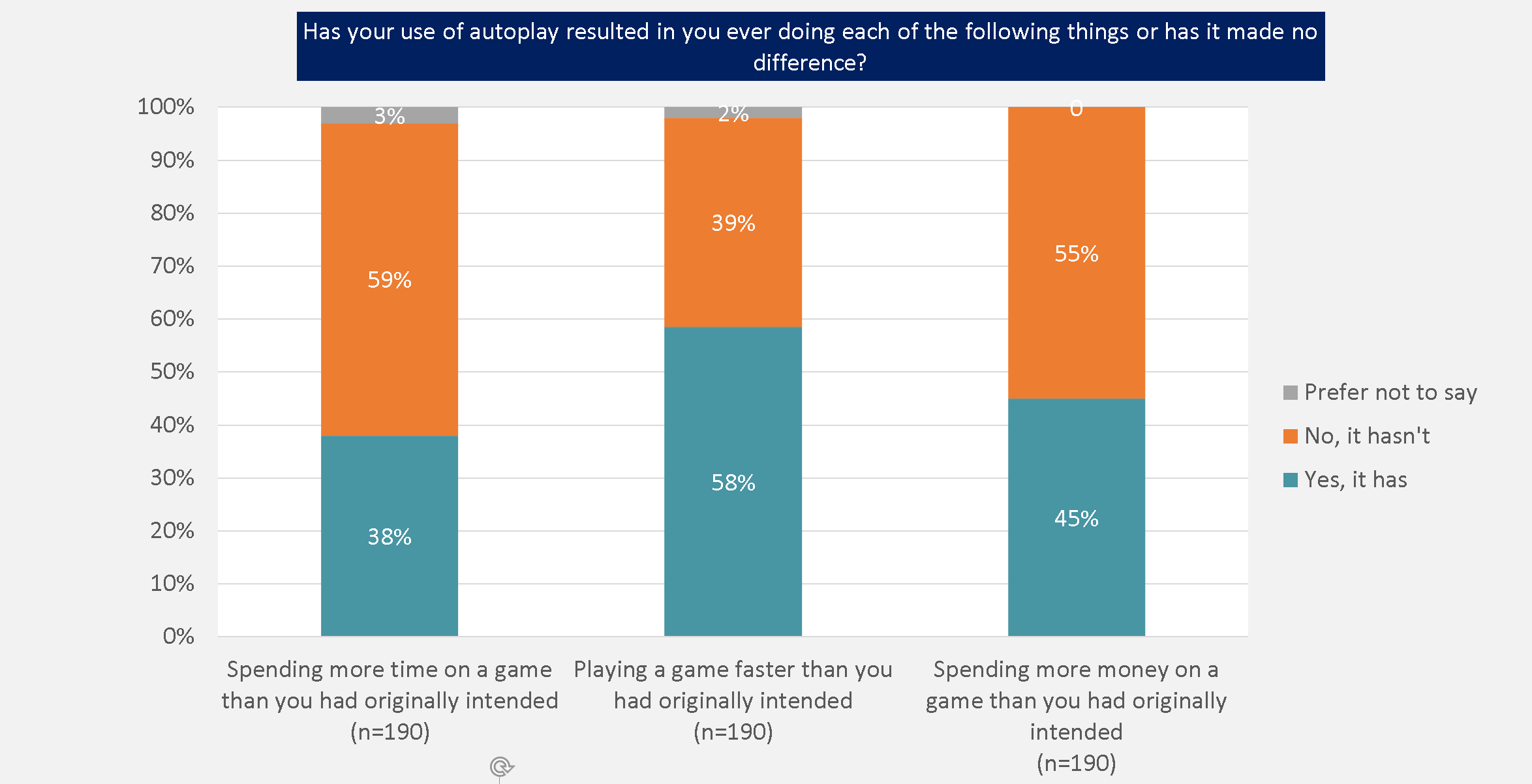 Sample size : 190 adults aged 18+ who have ever used auto-play on online slots

These findings imply that auto-play does have a strong relationship with intensity of play, albeit that we are not able to attribute causality between these factors.

Whist there is undoubtedly some evidence of a correlation with GRH for some, there are also findings which illustrate that for some auto-play increases their enjoyment and perhaps more importantly it is used by some as a budgeting tool or as a tool to provide breaks in play.

We are mindful that the removal of auto-play could therefore have an unintended consequence in terms of removing a budgeting tool for a number of players, we note that auto-play does not provide the only opportunity for slots players to use these facilities or for operators to encourage players to use them.