Data from the different surveys is not directly comparable due to mode effects.

To reduce the number of surveys the Commission currently uses to produce official statistics on participation and prevalence to provide a single set of trusted metrics. As part of this, to absorb content from our existing surveys into the new population survey.

More than two thirds of respondents agreed with the consolidation of surveys outlined in Proposal 2, although respondents were more likely to agree than strongly agree (31 and 11 respectively) suggesting some degree of reservation. 12 out of 61 respondents disagreed with the proposal, with most disagreement coming from members of the public.

Respondents felt that consolidating the surveys would simplify the data and make it easier to use. By removing the issue of mode effects it would make the results easier to communicate and easier for the end user to interpret the results. Having one headline measure would also mean the results could be reported with confidence. Respondents also thought a consolidated approach may be more cost effective.

However, there was some hesitation amongst respondents about the amount of content in each of the surveys. Respondents felt it may be difficult to consolidate all the questions into one survey which may lead to content having to be left out, although a modular approach to questionnaire design could be considered.

By moving away from the Health Surveys there was also a degree of concern about the access to health data that might be lost and specifically the ability to cross reference gambling data with health data.

Another concern raised was about using survey data alone to understand gambling participation, one respondent from a gambling charity felt that administrative data on gambling spend and behaviour should be used to externally validate the claimed behaviour in survey findings.

When asked if the current reporting of data via different surveys is an issue, 28 out of 62 respondents said it was, 13 out of 62 said that it wasn’t an issue and 21 said they were undecided about whether it was an issue or not. All respondents from academic organisations and charity/not for profit organisations said that the way the data is currently reported causes an issue for them.

The main issues identified were the confusion the statistics can cause both in terms of publishing data with lots of caveats to explain the impact of mode and for the end user in interpreting results. One respondent also thought there could be a risk that results are cherry picked. The other issue identified was the inability to make direct comparisons between survey results.

Figure 3: Is the current reporting of data via different surveys an issue? 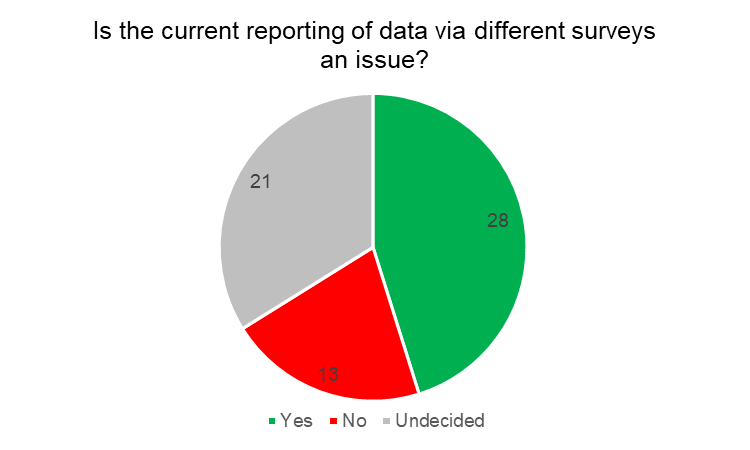 We will aim to reduce the number of surveys we use to produce official statistics on participation and prevalence to produce a single set of trusted metrics.

We will undertake a thorough review of the current questionnaires to determine which questions should be included in a consolidated survey design. We will also consider which questions from the Health Survey we may wish to retain to be able to continue to cross tabulate gambling with health-related metrics.

We understand the desire amongst respondents to be able to access data from the surveys and we will aim to publish data from a new consolidated GB-wide survey on our website and in the UK data archive.