Lack of control over the inclusion of our questions on the Health Surveys limits our ability to report representative data for the whole of Great Britain.

To replace our current usage of the separate Health Surveys for England and Scotland and equivalent survey in Wales with a new ‘gold standard’ population survey which covers the whole of Great Britain via a large and robust sample. We will consider both existing population surveys that we can access, and new surveys, which would be designed for this purpose, as a means of meeting this objective.

Amongst those who agreed, it was felt that a single survey for Great Britain was a logical idea. They thought a large sample of respondents with consistency and coverage across all three nations would produce a more representative and useful dataset. One respondent representing academia welcomed the proposal, saying that the “inability to understand changes in gambling behaviour across GB (currently) hampers regulatory and policy decision making”.

However, respondents also thought it would be advantageous if the survey design had the potential to be flexed and adapted to meet the needs of the rapidly changing environment.

Some respondents thought it was unlikely that an existing survey vehicle could accommodate the needs of our research and therefore a bespoke population survey would need to be commissioned specifically for the Gambling Commission. One academic stated therefore that their agreement with the proposal was conditional on the new methodology utilising a ‘gold standard’ approach.

Whilst data at lower geographical levels was welcomed by respondents, there was some concern about what would be possible. One respondent made a comparison to the Active Lives Survey which has 500 responses per Local Authority area, commenting that this would be insufficient for a robust measurement of the prevalence of problem gambling at this low level geography. This led some respondents to comment that the investment required for a new bespoke population survey would be substantial, with an operator calling for the Commission’s research budget to be set out publicly as part of the Commission’s annual report and accounts.

One respondent from a trade association thought that the proposals for a new survey were only at the formative stage and welcomed the opportunity for external stakeholders to be more involved before any decisions are made. Similarly, others thought there was merit in further reviewing the current methodology before making any changes, with suggestions to push for secured space on the Scottish Health Survey and to implement a comparable Health Survey in Wales.

When asked if it is important to adopt a survey approach which covers the whole of Great Britain, the majority of respondents said that it was. 50 respondents said yes, six said no and six were undecided. Respondents thought the approach will help to provide a single set of results (i.e. one version of the truth) for Great Britain, and the ability to accurately compare results between nations. However, a survey vehicle which provided the ability to make regional adjustments to questions would also be seen as advantageous. Two respondents also thought that consideration should be given to a UK wide survey vehicle, especially they said given plans to modernise gambling laws in Northern Ireland.

Figure 2: Is important to adopt a survey approach which covers the whole of Great Britain? 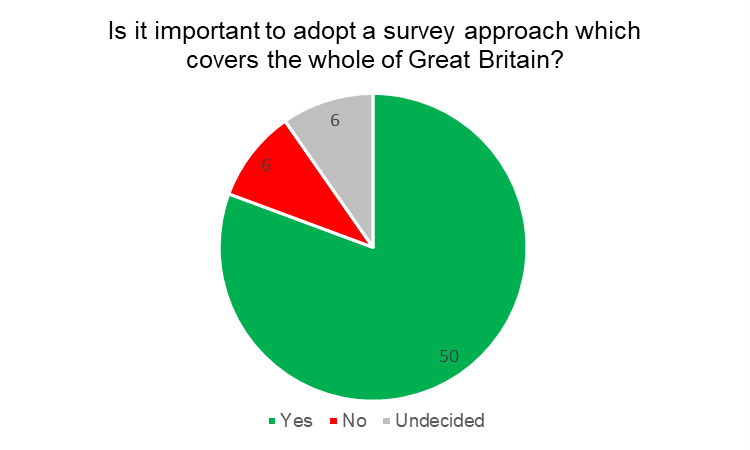 Our proposal was to develop a new population survey which covers the whole of Great Britain via a large and robust sample to overcome the lack of control we have on the questions included in the Health Surveys and the inability to report GB-wide data on a regular basis. The proposal was met with a high level of agreement from respondents.

We therefore plan to progress with Proposal 1 and develop a GB-wide survey for measuring gambling participation and the prevalence of problem gambling.

Based on the feedback received we will explore options and costs for a bespoke survey commissioned by the Gambling Commission for the purposes of understanding gambling behaviour. However, we will also consider if there are any existing survey vehicles that might be suitable.

If a bespoke survey is commissioned, we will ensure the questionnaire is designed in a way that ensures a core set of participation and prevalence questions are asked regularly alongside modules of questions asked on a less frequent basis.

As our remit is to regulate gambling in Great Britain our initial focus will be on rolling out a GB-wide survey. However, we welcome the opportunity to align research with colleagues in Northern Ireland so that useful comparisons can be drawn between the nations and will explore approaches which would be flexible enough to be extended to Northern Ireland in the future if that is considered a good idea.